New music Fridays are a thrilling, yet daunting prospect for any music lover.

It’s essentially a weekly holiday where fan-favorite artists and fresh faces alike drop their latest offerings for all the world to hear, flooding streaming services and digital retailers with an onslaught of aural goodies. But who has the time to sit there and listen to everything before updating their playlists? There’s just too much good stuff! (And, if we’re being honest, usually a few stinkers, too.)

As it turns out, we do. Welcome to The MixtapE!

Another week down, music lovers. And how do we know, with time becoming nothing but a flat circle in these socially-distanced times? The onslaught of new music, of course. By now, you’ve probably already given Katy Perry‘s latest anthem a spin and maybe even gotten lost in the sweet summer vibes of the new Jonas Brothers tracks, but that’s truly just the tip of the iceberg.

As always, we’ve listened to (nearly) everything and returned with our picks for the best of this week’s best. Your playlist for the weekend of May 15-17, 2020 has arrived. Enjoy! 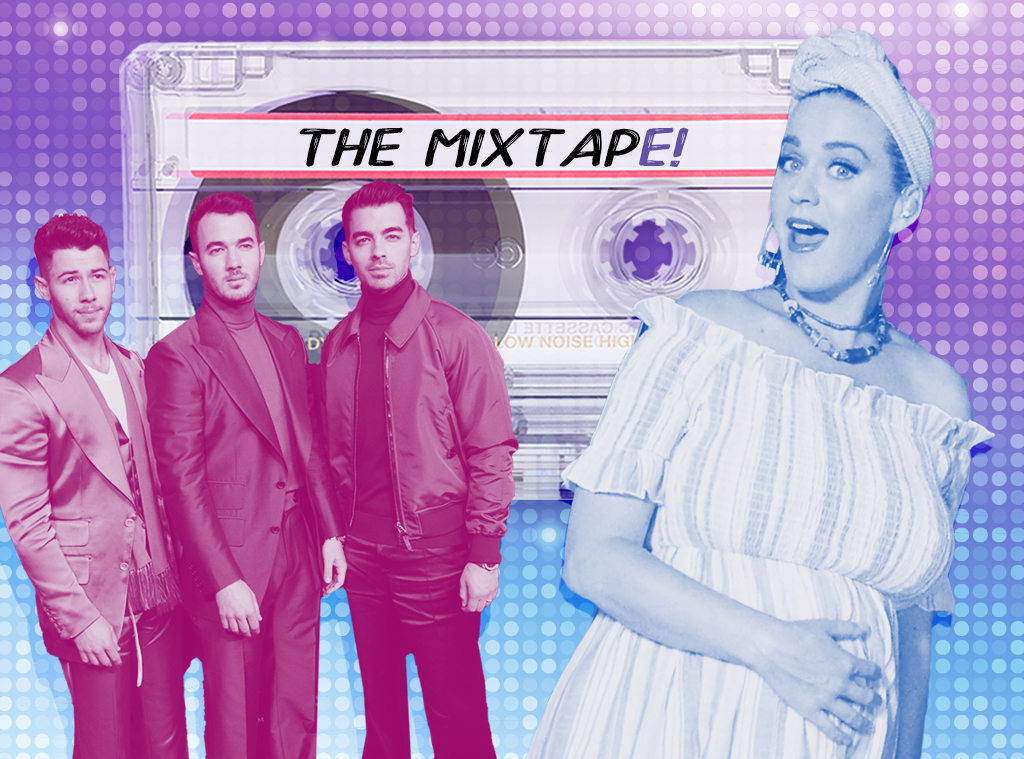 After a handful of standalone releases last year and the pregnancy-revealing “Never Worn White” drop in March, Katy is back with the official lead single from her forthcoming fifth studio album. And the inspiring track finds her returning to what she does best: delivering an empowering anthem on par with “Firework” and “Roar.” “When did we all stop believing in magic?” she asks in the the song’s second verse. Good question.

The JoBros are back today with a dual release, and while “Five More Minutes” is a bop in its own right, it’s this sultry, summery collab with the Colombian superstar that has us grooving. Summer 2020 may be unlike any we’ve ever experienced, but as long as we’ve got bops like this, we just might make it through.

Miley Cyrus‘ kid sis dropped her second EP today, the apocalyptically-entitled THE END OF EVERYTHING, and upon first listen, we found ourselves struck by this standout track that finds the singer grappling with the darkness around her. “Don’t wanna be young and sad another day longer/Don’t wanna feel numb or mad until I go under” she admits in the highly relatable chorus, before comparing herself to her older sis in the second verse. “My sister’s like sunshine/Always bringing good light wherever she will go,” she sings, “And I was born to rain clouds/When they blew the flame out/Blessed in her shadow.” Oof.

Aside from delivering a daily DJ set on Instagram since social distancing began, our favorite duo comprised of Sophie Hawley-Weld and Tucker Halpern somehow also found the stamina to link up with the English EDM duo for this excellent track encouraging everyone to keep the party going at home. “This won’t last forever, treat your sadness with a smile/We can’t have what’s next till we hang inside for a while,” Soph sings before encouraging everyone to put on their Sunday best and find a way to enjoy their house arrest. Socially responsible and it slaps? We have no choice but to stan.

The Grown-ish stars and Beyoncé protegees set it off with this shimmery and seriously sexy slice of R&B. And the accompanying video? They did that. A total serve. Get into it.

Proving she’s the most innovative and forward-thinking pop star in the game, Charli has released how i’m feeling now, her fourth studio album that was recorded entirely while isolating during the global coronavirus pandemic. Working virtually with collaborators scattered all cross the globe, she’s somehow delivered a truly cohesive collection that hones in on our most unique moment in time. It’s all worth a listen, but if you need us, we’ll be getting down to this standout track, an ode to the sort of nights we’re all sorely missing right about now, for the foreseeable future.

If that Charli track didn’t have you missing the dance floor, this sublime collab between one of pop’s most egregiously slept-on stars and the EDM musician sure will. This one is a stunner with a beat drop that’ll crawl under your skin, refusing to leave until you literally dance it out.

This collab between the North Londoner and the American up-and-comer is some seriously sensual future R&B, the slinky sort of thing you put on late at night when you’ve got bedroom eyes. It’s a steamy one.

This collab between Lennon and Charlie, featured on the Scoob! soundtrack, is the sort of pure pop that’ll have you feeling the summer sun on your skin even if you’re continuing to shelter in place. A feel good tune right when we need it most.

Yuna — “Stay Where You Are”

The Malaysian songstress didn’t intend for this stunning indie release to hit as hard as it does with much of the world in quarantine, but it’s certainly taken on a whole new meaning. “This song hits harder right now because we are all isolated in our homes, some even away from their loved ones. Though we’re apart, it’s nice to remind each other to just ‘stay where you are’ and when this is all over, we’ll be with each other again,” she wrote on her website. “There’s a strong sense of togetherness in the song that I love. When you listen to it, you know that whatever you are going through, you are not alone.” And, please, do as she says.

Donna Missal — “Let You Let Me Down”: The latest single from the alt-rock singer’s forthcoming album finds her telling an ex that she’s not letting them in just to hurt her again any more. Highly relatable.

FLETCHER with Kito — “Bitter”: The rising pop star links up with the Australian producer for this perfectly petty breakup anthem. It’s a bop.

ALMA — “Nightmare”: At long last, the Finnish alt-pop singer and in-demand songwriter’s debut album, Have You Seen Here?, is finally here. And it was worth the wait. This brassy deep house track blew us away, but the entire LP is worth your attention.

Chantel Jeffries feat. Shaylen — “Come Back to Me”: This feel-good collab is a dance-pop delight, inescapably effervescent.