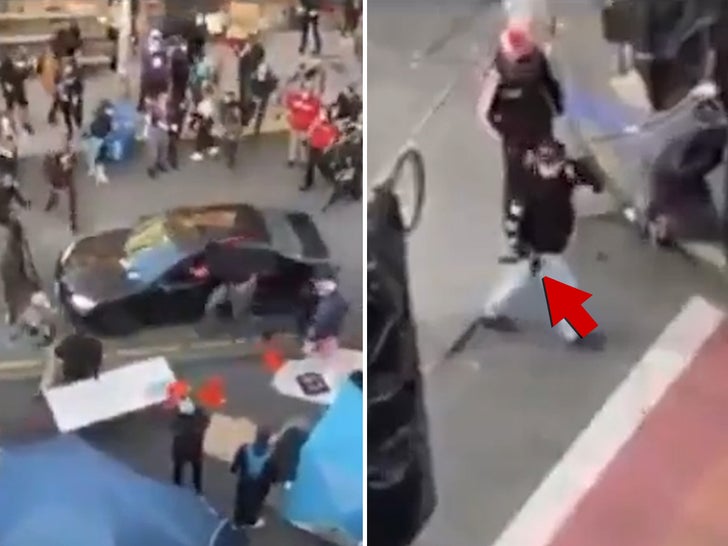 Cops have a Seattle gunman in custody after he drove his car down a crowded street of peaceful protesters and shot a person who tried to stop him.

It was a terrifying scene Sunday evening as the black car came barreling down a street … forcing people to run and jump out of the suspect’s path.

Video footage of man driving his car into #BlackLivesMatter protest in Seattle and shooting a man through the window before he flees. #seattle #seattleprotest pic.twitter.com/3iUI7eKEye

He slowed down as he approached a barricade, and a few people reached into his car … trying to stop him before he reached a much more crowded street. That’s when he opened fire, shooting one male victim … then stopped his car and got out brandishing the handgun.

Onlookers from surrounding buildings screamed in horror, and the gunman started running through a packed street of people protesting the killing of George Floyd.

A man drove through 11th and hit a barricade. He exited his car and flashed a gun. The police say they have the man in custody and have the gun. They asked for anybody who is hurt to come to the barricade. A man was on the ground on 11th and Pine. He’s up now. pic.twitter.com/47eZZOvG59

Seattle PD was able to track down the gunman before anyone else was injured and they now have him in custody.

The 27-year-old man who was shot in the arm was taken to hospital for treatment.

Previous: Prince Andrew asked by US to testify in Jeffrey Epstein sex case
Next: Jeff Bezos Is Happy to Lose Customers Against Black Lives Matter