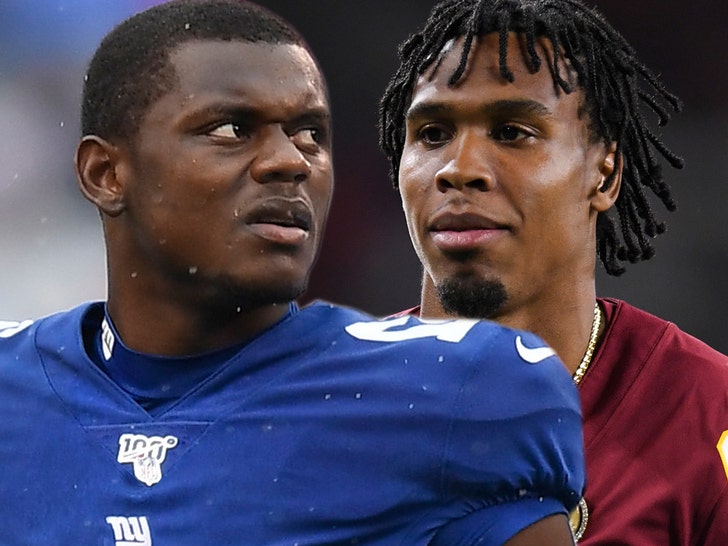 4:27 PM PT — The Giants have issued a statement regarding Baker’s alleged role in the robbery … saying, “We are aware of the situation. We have been in contact with Deandre. We have no further comment at this time.”

Two NFL players — including a 2019 1st round draft pick — have been accused of armed robbery and arrest warrants have been issued, TMZ Sports has learned.

According to police, the two men were partying in Miramar, FL on May 13 … when things took a disturbing turn.

Cops say Baker and Dunbar were allegedly hanging at a cookout — playing cards and video games — when an argument broke out and Baker whipped out a semi-automatic firearm.

Cops say the men began to rob party guests … with Dunbar assisting in taking watches and other valuables at the direction of Baker.

At one point, cops say Baker directed a 3rd man — who was wearing a red mask — to shoot someone who had just walked into the party … but fortunately, no one was actually shot.

Law enforcement says the men made out with more than $7,000 in cash — along with several valuable watches including an $18,000 Rolex watch, a $25,000 Hublot and a pricey Audemars Piguet timepiece.

There are conflicting reports from witnesses about whether Dunbar was armed with a gun — some say he was, others say he was not.

One witness told cops they had met Baker and Dunbar at a party a few days earlier in Miami — at which the NFL players had “lost” around $70,000.

Our sources tell us the men had “lost” the money in high-stakes card games and other forms of gambling.

One witness told cops the men were gambling again at the May 13 event … when an argument broke out and Baker allegedly flipped a table and busted out his piece.

According to cops, some people at the party believe it was a planned robbery because when the 3 men were done taking valuables, there were 3 getaway cars strategically positioned to “expedite an immediate departure.”

FYI, the alleged getaway cars were SICK — a Lamborghini, a Mercedes-Benz and a BMW.

The Miramar Police Dept. says warrants for the two NFL players’ arrests have been issued … though neither player is currently in custody.

Cops tell us they have been in contact with reps for the suspects and they’re currently working on a planned surrender.

22-year-old Baker — a former Georgia Bulldog superstar — was picked with the 30th overall selection in the 2019 NFL Draft and is expected to compete for a starting job on the Giants this season.

27-year-old Dunbar, meanwhile, was just traded from Washington to the Seahawks in March after starting 25 games for the Redskins from 2015-2019. He’s also expected to compete for starter’s minutes in Seattle.