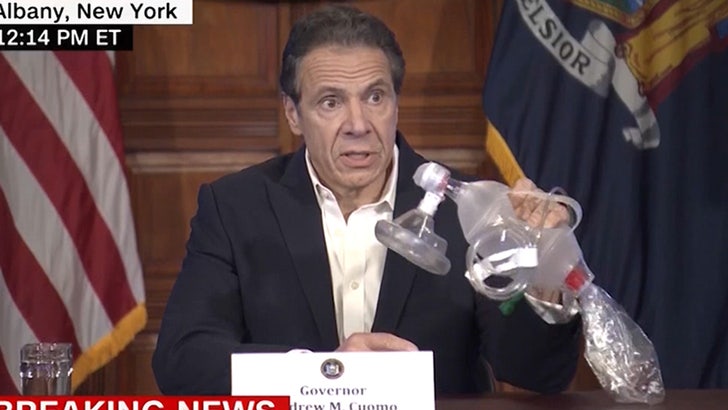 Desperate situations require desperate measures … and New York Governor Andrew Cuomo just unveiled a new, albeit crude, ventilator that may fit the bill, but he says it’s “an unacceptable situation.”

The Guv held his daily news conference Saturday, and demonstrated how the device — called a Bag Valve Mask — would work. Regular squeezes could keep a patient alive. Problem is … you need someone to squeeze it 24/7. Cuomo made it clear … he prays it won’t come to this.

Cuomo also revealed an insane problem over ventilators. The cost when the pandemic began was $25,000 a pop. Now it’s closer to $45k, because the various states are bidding against each other to snag the equipment. Bidding wars, Cuomo says, in the middle of a pandemic, are ridiculous.

As for New York, Cuomo says the feds have shipped 4,000 ventilators but none are in use yet … he says they need the equipment because the spread of the virus will get a lot worse before it gets better … and NY hospitals are already pushed to the limit.

We’ll say it one more time … if this happened 6 months earlier, Cuomo could have ended up the hands-down fav to challenge Trump.