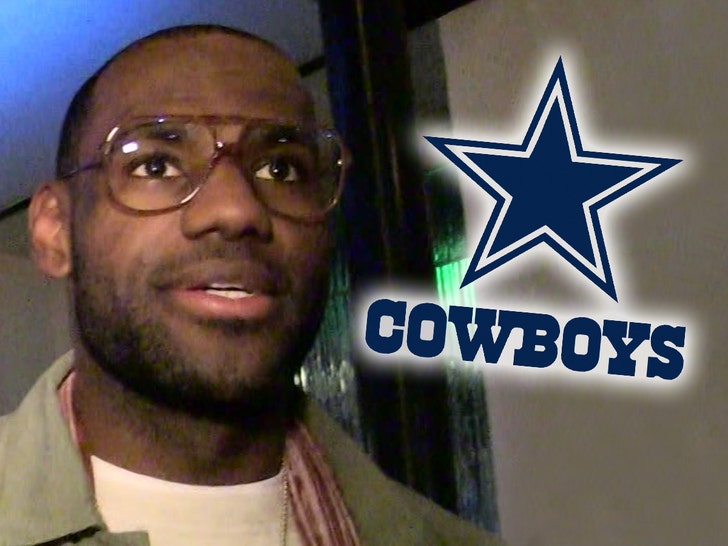 The King and his business partner say that damn-near happened way back in 2011 … with Maverick Carter revealing Jerry Jones offered LBJ a contract with the Dallas Cowboys!!

Here’s the deal … LeBron said on an Uninterrupted podcast Monday he had such serious concerns about the NBA lockout in 2011, he actually began training for a pro-football career.

The Lakers superstar — who was with the Miami Heat at the time — says he changed up his whole workout routine in the event he would have to switch sports.

LeBron says he was dead serious about it all too … claiming he added 40 times, more bench pressing and even sled pushing.

“The thoughts came into my mind,” James said. “I had no idea how long the lockout was going to be.”

In fact, Carter chimed in and said things got so serious — the Cowboys actually reached out with an offer!!

Fortunately for the NBA, the league got back to work, and LeBron never had the chance to switch sports … instead, deciding to frame and hang Jerry’s offer on the wall as opposed to signing it.

But, LeBron admits football is an itch he’s sad he never scratched … revealing he straight-up still dreams about the sport!

“It’s crazy because I actually never run on the field in my dreams,” James said. “It always gets to the point where I’m either in the locker room or getting dressed or talking about or seeing the fans and as soon as I’m about to run on the field, something else happens in my dream. It’s like something that it always happens like that.”

The NBA is still hoping to return to play this season amid the coronavirus pandemic, but, in the meantime, the Cowboys COULD still use another tight end …