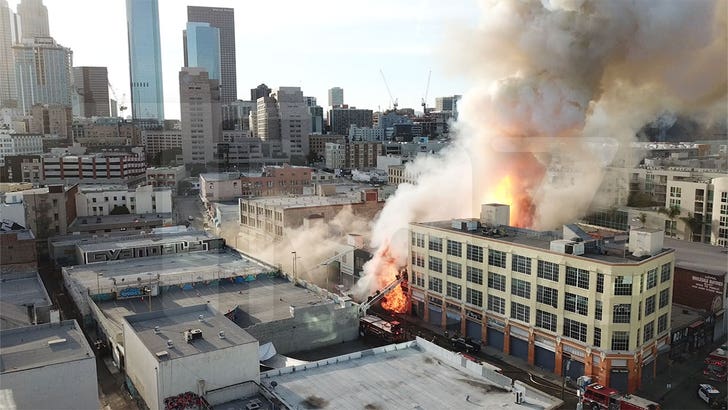 A group of brave Los Angeles firefighters were hospitalized after they were caught in a massive fireball while fleeing an exploding building … and it’s all on wild video.

The scary moment went down Saturday evening in Downtown L.A., where LAFD crew members were responding to a structure fire at a warehouse-type building near Little Tokyo, which quickly escalated into a dangerous situation that required everyone to get out.

LAFD says smoke started rising way too quickly and the inside was getting hotter by the second. Suddenly … an explosion rang out and the building was starting to become engulfed in flames. While trying to safely exit, a group of about 7 firefighters had to climb down their firetruck ladder from a window — and cross the red hot flames in the process.

We hope everyone injured makes a speedy recovery! pic.twitter.com/y5a0xM5Bk5

About 3 to 4 of them were actually set completely ablaze as they were making their way down — becoming fully engulfed in the fire ball all around them that was raging like crazy. Parts of their helmets melted, and their jackets caught on fire too. Even some of the firetruck’s seats began to burn as a result … according to LAFD spokesman Erik Scott.

The footage of the moment when a handful of them were caught in the blaze is insane to watch — it was even caught from a couple different angles, including drone footage you can see here. Scott described it as directly walking through a 30-foot blowtorch. Yikes …

At least eleven firefighters were hospitalized as a result, and 4 of them are in the ICU in critical condition. Fortunately, all of them are expected to survive … which is truly a miracle.

As for how the fire started, the official cause is still under investigation. However, it’s reported that the warehouse in question was a local supplier for those who manufacture butane honey oil … which is highly flammable. Multiple buildings caught fire, and it took hundreds of firefighters to finally temper the flames into the night.

Plumes of smoke filled the sky and tons of ash were left behind on the ground during and afterward. Give it up for those first-responders putting their lives on the line — not an easy job.