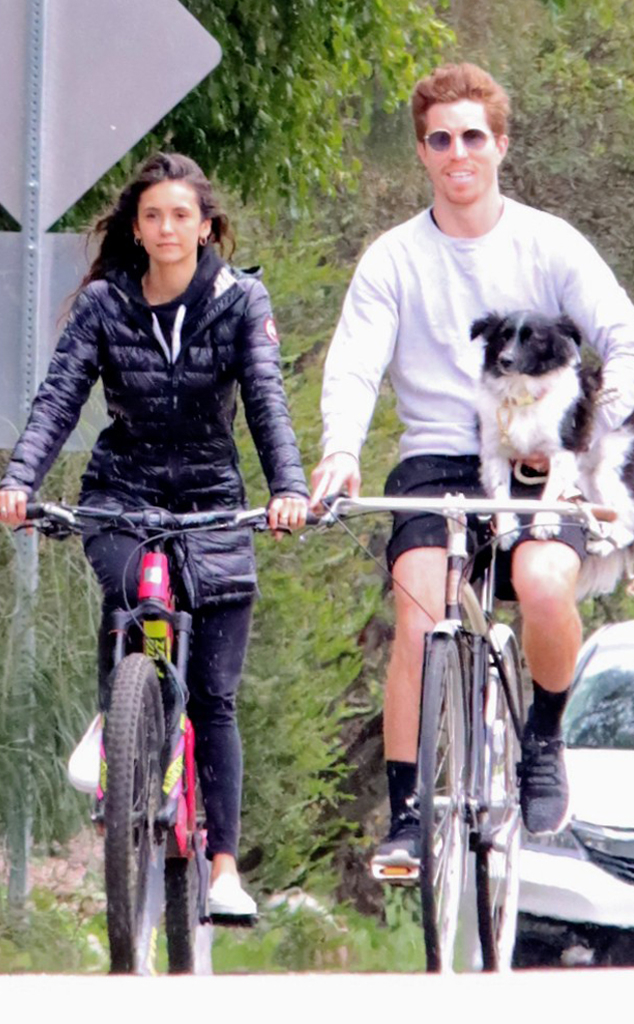 Nina Dobrev and Shaun White are sparking romance rumors, especially after they were spotted on afternoon bike ride in Malibu, Calif on Sunday.

While the three-time Olympic gold medalist and the Vampire Diaries star kept some distance, possibly as a safety precaution with the ongoing Coronavirus pandemic, they did seem to enjoy each other’s company.

For the afternoon outing, Dobrev stayed warm and cozy by wearing a black puffer jacket and matching sweatpants. The 33-year-old athlete opted for a white long-sleeve shirt and black shorts.

In photos captured by paparazzi, White appeared to be holding the actress’ dog during the bike ride.

According to a source, the duo’s outdoor stroll has been one of their many hangouts recently. However, despite fueling romance rumors, they have yet to make anything official.

“Nina and Shaun have been spending a lot of time together recently,” the insider shared. “Their relationship doesn’t have an official title right now, but that’s pretty normal for Nina.”

The insider added that Nina’s inner circle is “pleasantly surprised” by her interest in Shaun and their recent hangouts.

“Shaun is a departure from previous guys Nina has been with,” the insider explained.

However, don’t expect the Vampire Diaries alum to put her possible love interest on full display. At least, not anytime soon.

“Nina is very private about her romantic life,” the source expressed. “She is very careful about posting photographs together because she wants to ease into things naturally and organically.”

As some fans may recall, the 31-year-old actress has been single for nearly 4 months. Back in November, she and Grant Mellon called it quits after dating for about a year.

“Nina hasn’t mentioned a breakup,” a separate source explained to us at the time of their split. “But she hasn’t spoken about Grant in several weeks. She seems to be quite happy and has recently been out socializing with friends, each time without Grant.”

At this time, Nina’s reps could not be reached for comment.