If you’ll excuse us the pun, Danica Patrick has no intent to race toward matrimony.

When assessing the strength of her relationship with Aaron Rodgers, the retired race car driver has a far healthier measuring stick than the state of the fourth finger on her left hand. Questioned by Jenny McCarthy about their marriage timeline during a recent appearance on The Jenny McCarthy Show, she responded thoughtfully. “That’s one of those things. You can’t be attached to something going a certain way because if you really want something to happen, there’s that equal energy of being afraid that it’s not going to happen,” she explained. “You just have to let it go and be like well, am I having fun today? Yep? Then life’s good.”

It’s a lesson that she perhaps learned the hard way, having joked to a TMZ cameraman she “was ready yesterday” when asked back in 2017 if she and fellow driver Ricky Stenhouse Jr. were cruising toward an engagement. But, having reached this imminently reasonable conclusion, much like how someone finds a partner when they stop looking, “I’ll probably get proposed to tomorrow now,” she mused.

Or perhaps today, her 38th birthday being as good a day as any to officially commit to forever with his love of several years. “Aaron is planning to propose, 100 percent, for sure,” a source tells E! News of the 36-year-old. “It’s not a matter of if, but when.”

They’ve already crossed off those other we’re-in-a-committed-relationship thresholds, confirming that their years of platonic correspondence had transitioned into a very much more than friends romance two years ago, when she told the Associated Press quite simply, “Yes, Aaron and I are dating.” The next month, they were openly kissing at the Daytona 500, where Patrick was set to kick off the first of her final two career races, before taking her last lap at May’s Indianapolis 500.

And five months after that, the excessively athletic pair made their red carpet debut, appropriately, at the ESPYS—the ceremony recognizing excellence in sports performance being the same spot that initially brought racing’s most recognizable name and the Green Bay Packers quarterback together back in 2012. Plus there’s that shared $28 million Malibu mansion, the oceanfront spot being a pretty nice spot to create a forever.

And though the two-time NFL MVP is about as likely to detail everything he loves about Patrick as he is to throw multiple interceptions a game (frankly, the public birthday and Valentine’s Day wishes are a lot for someone who’s declared, “When you are living out a relationship in the public eye, it’s definitely…it’s difficult,”) they’re an absolutely winning team.

“He’s become less private about his relationship because he’s really proud to have her by his side,” says the source. “They are completely smitten and committed to each other, and they’re in it for the long haul.” 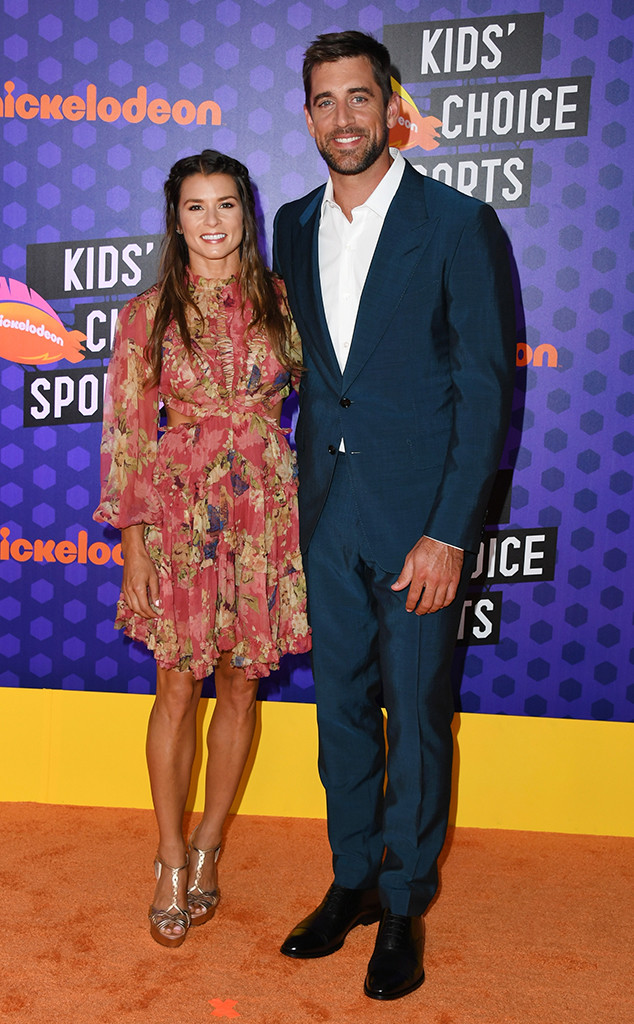 Which is appropriate, considering it was a bit of a long haul to reach this place.

“We both remember, we remember meeting each other, it was quick,” she shared with Jenny McCarthy last May, the comedian’s SiriusXM show apparently being the place she goes to share relationship updates, “but I got his email address and I remember thinking to myself back then, ‘Oh…not a phone number, just an email address.’ Whatever.”

Still, “We kept in touch just a little bit, there were some years I don’t think we talked to each other and then some, every now and again—but it wasn’t until obviously recently that we actually had phone numbers.”

It was all a bit star-crossed, she revealed, the initial issue being other romantic entanglements, with Patrick recently separated from ex-husband Paul Hospenthal at their first meeting and racing into a romance with Stenhouse Jr. not long after. Rodgers, meanwhile, spent three years on actress’ Olivia Munn‘s arm.

And then there were those other allegiances. Born in one of Wisconsin’s southern-most cities, just an hour and a half outside the Windy City, Patrick actually grew up outside state lines in Illinois as a devoted Chicago Bears fan, da Bears being, of course, a direct rival to Rodgers’ Packers.

And her fandom was pretty firmly entrenched, passed down from her father. “My dad grew up with all Packers fans, so what he says is, ‘I’m not against the Packers, I’m against the Packer fans,'” she explained on Jimmy Kimmel Live last year.

So she and Rodgers had fun with the division: “We referred to each other as ‘Chicago’ and ‘Green Bay,'” she admitted to McCarthy. “It was very cute. Like the Capulets and the Montagues, you know.”

The annual ESPYS served as a touchstone for the faux foes. “We’ve just been sort of friends the whole time, kept in vague touch and see each other at the ESPYS almost every year, and other places,” Patrick, the only female race winner in IndyCar Series history, told For The Win in January 2018. “So one thing led to another, and we realized how similar we were, and yeah, that got the ball rolling.” The ball has since cruised through shared interests (exercise, naturally, with the Pretty Intense scribe putting the football player through her paces, along with a love of travel, dogs and reading), past commitment-ville, the first signs of which might have been when Patrick donned that initial piece of green-and-gold gear.

Which, she has, loudly and proudly, making sure to call it out each time her guy delivers another 23-of-33, three-touchdown winning performance. “Another simply amazing performance by @aaronrodgers12!” she wrote on Instagram after a victory over the Kansas City Chiefs. “Getting it done week in week out.”

And perhaps it’s her own status as a professional athlete that’s spared her a bit from the tired and misogynistic blame-the-girlfriend trope all too familiar to those that happen to date football players.

“Danica is an amazing partner for Aaron. She’s stood by him for countless games, cheering him on from the sidelines,” says the source. “She’s very down to earth and she also gets the pressures of competitive sports. She is his biggest cheerleader and fan.”

And as a member of Team Aaron, she’s done her part to diffuse the bitter feud that had built up between Rodgers and his family, one that was made uncomfortably public when little brother Jordan Rodgers made it to the hometown portion of The Bachelorette in 2016 and explained to now-fiancée JoJo Fletcher why his famous sibling wouldn’t be coming to dinner.

In last 2018, while commenting on the firing of Packer’s coach Mike McCarthy, Rodgers revealed he was “at home with my folks in town for my birthday” when he heard the news. And a source says Patrick was as responsible for that candlelit reunion as anyone else. 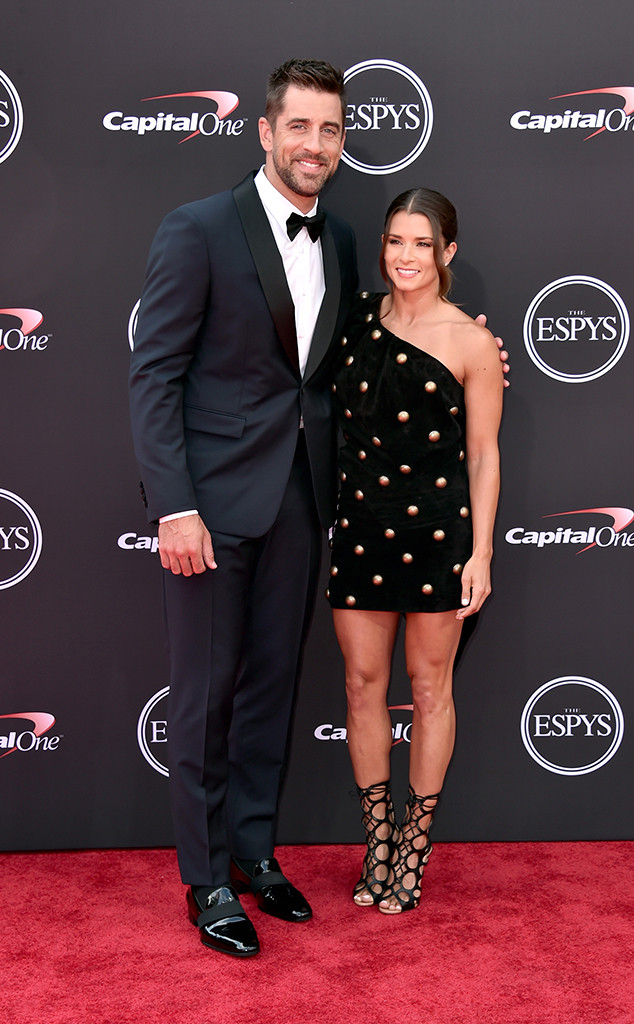 “Danica has been instrumental in helping mend the Rodgers family rift,” notes the source. “She is the reason Aaron and his family are on speaking terms again. Danica has been working to bring everyone back together.”

Rodgers, in turn, has been helping Patrick make the most of retirement. (One that includes analyst work, an athleisure collection, a wine brand, a podcast called Pretty Intense and, of course, those GoDaddy commercials, but still a pseudo retirement.) Her aspirations for post-racing life were pretty ordinary. “I’m excited to have a weekend,” she told the Los Angeles Times in 2018. “I’m excited to go to a farmer’s market. Simple things like that. There’s always a farmer’s’ market. There’s always a vacation. There’s always just enjoying life. I love the idea of looking at my schedule and being able to plan things.”

Or allowing her guy to step in, putting together off-season trips to Mexico, Africa and India. “Aaron really loves doting on Danica,” reveals the source. “He loves being able to take care of her, he sees no problem with whisking her away on surprise getaways and fun excursions.”

And should that next journey end at the top of an aisle, that’d be all right. But, seriously, she’s in no rush.