In this week’s Fight Talk we look at reports that Tyson Fury v Deontay Wilder III could take place in Australia on Boxing Day, options for who Saul ‘Canelo’ Alvarez should fight next and UFC president Dana White’s rant at boxing promoters Bob Arum and Oscar de la Hoya.

“We are flexible around the timing, but if we did it at 1:30pm on Boxing Day, it would be beamed back into the States on Christmas night,” Australian promoter Dean Lonergan told The Sydney Morning Herald.

For British fans, the fight would be aired around 2:30am (GMT) on Boxing Day.

The idea isn’t as far fetched as you think – WBC champion Fury’s co-promoter Bob Arum has worked with Lonergan before, notably when Filipino Manny Pacquiao travelled to Brisbane in 2017 and was surprisingly beaten by Jeff Horn.

Fury’s career – a remarkable story – has often been compared to the Rocky Balboa films. Should this fight, date and location come to fruition, it would have striking similarities to Rocky IV, when Balboa took on Ivan Drago in Russia on Christmas Day.

Meanwhile, it seems Fury is already in the Christmas spirit, the ‘Gypsy King’ was in a giving mood this past week as he surprised this young fan on Instagram…

Who should ‘Canelo’ fight next?

Saul ‘Canelo’ Alvarez is arguably one of the biggest draws in world boxing.

He’s held full world titles in three weight divisions (four if you count also count the WBA ‘regular’ super-middleweight belt) and just one loss – to Floyd Mayweather in 2013 – in a 56-fight career.

And the Mexican is not short of cash either.

So, in summary, a fight against Canelo is the golden ticket for any boxer.

And as boxing makes its return in the midst of the coronavirus pandemic, Eric Gomez, president of Golden Boy promotions, has said Canelo will fight in September, most likely behind closed doors.

But who will he face?

Well, if you believe the rumour mill, there is a not very short, shortlist drawn up.

Britain’s Billy Joe Saunders had all-but-signed a deal to fight him in May and could still be in the running, although Gomez says Japan’s Ryota Murata could also be an option.

Sergiy Derevyanchenko, who lost to Gennady Golovkin in October, has also been mooted.

And according to Boxing Scene, American two-time super-middleweight champion Anthony Dirrell is now firmly in the mix to fight Canelo. Although that hasn’t gone down too well with boxing fans… 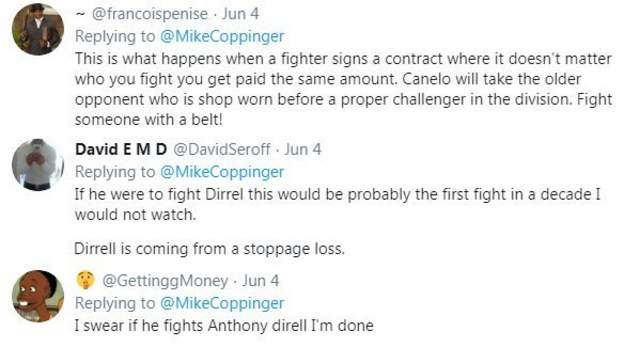 Fans would however welcome a Canelo match-up against Caleb Plant, who holds the IBF super-middleweight belt or his fellow American and WBC champion David Benavidez. But it’s unlikely either of those fights would happen next.

A left-field choice could be WBA light-heavyweight champion Dmitry Bivol. The Russian is willing to come down in weight…

Then there is Liverpool’s WBA ‘Super’ champion Callum Smith, who was also strongly linked with Canelo earlier in the year.

Lots of names, some more exciting than others. But we should find out for definite in the next few weeks.

The three of them discussed the differences between boxing and mixed martial arts, potential cross-over bouts and plans for UFC fights to be held on a ‘Fight Island’.

And White did not hold back in an expletive-laden outburst direct towards American promoters Bob Arum and Oscar de la Hoya.

The feud with De La Hoya first started ahead of the Floyd Mayweather v Conor McGregor bout in 2017, when De La Hoya urged fans not to buy the event.

Arum and White’s back and forth has been ongoing, and the 88-year-old boxing promoter recently criticised White for putting on a behind closed doors UFC event at the height of the coronavirus pandemic.

Speaking to Hearn, White said: “You’re actually a smart guy that’s built a business and can look at another guy’s business and appreciate it and say ‘look at what this guy’s built’.

“Those two don’t have that ability.”

The full episode is a recommended watch. Even if it’s just to see Hearn and Bellew fanboying over White…